Naturally Splendid Chief Financial Officer Mr. George Ragogna states, “The company continues to focus on reducing operating overheads while we continue to re-purpose our existing certified food facility in Pitt Meadows, BC to optimize production of plant-based entrees. We have made positive strides for the Company in several areas including securing an exclusive ten (10) year manufacturing and distribution agreement for Canada with Flexitarian Foods Pty. Ltd, Australia’s largest plant-based manufacturer. This 10-year exclusive manufacturing agreement can be extended for a further ten (10) year period.

The facility build-out will allow for the production of up to twenty (20) tons of plant-based entrees daily for the majority of our standard plant-based offerings, but as much as thirty (30) tons of plant-based production daily for certain products. This translates to a manufacturing capacity potential of over $30,000,000 CDN annually. Our manufacturing facility remains a cornerstone to the future of the Company as we expect to drive revenue from not only our Company branded products, but also through private label and contract manufacturing clients.

Ragogna continues, “The Company is focused on penetrating the plant-based market both in food service and retail channels. Initially, the Company focused on food service, developing a network of distributors that include national distribution partners such as Sysco Canada and Gordon Food Services (GFS). The Company recently engaged one of Canada’s leading foodservice brokers, Tri-Elite Marketing to represent PlanteinTM across Canada. Food service was our initial focus, producing successes such as a national listing for our plant-based nuggets and tenders with Denny’s Canada and Bar One restaurants”.

The Company recently launched PlanteinTM, the Company’s retail line of plant-based entrees. In this regard, the Company has secured exclusive rights for the PlanteinTM trademark for Canada from Flexitarian Foods. The term for licensing the PlanteinTM trademark is for ten (10) years with a ten (10) year renewal option, matching the term of the exclusive manufacturing and distribution agreement from Flexitarian Foods. Our initial PlanteinTM launch focuses on eight (8) plant-based entrees including a plant-based; Burger; Crispy Burger; Crumbed Tenders; Sweet Chili Tenders; Nuggets; Schnitzel (cutlet); Garlic Kiev; and the Phishy Fillet.

While we continue to progress with the build-out of our facility, our combination of brokers, distributors and internal sales staff continues to work towards increasing our sales in both food service and retail channels. All manufacturing equipment has been ordered, however, continued supply chain issues have delayed shipment of certain components of the manufacturing line which is pushing out the completion date of the facility. As such we have taken proactive measures with our strategic partners, Flexitarian Foods, and have ordered additional containers of product to support our aggressive sales strategy.”

Company CEO Mr. Craig Goodwin states, “The Company recently attended three (3) significant industry tradeshows that have been on a hiatus for the past two (2) years due to the pandemic. Being able to sample our delicious entrees in tradeshow settings has made a huge difference, generating significant interest in our PlanteinTM line of plant-based offerings. Tradeshows attended include; Western Canada’s largest natural, health and organics trade event, Canadian Health Food Association (CHFA) tradeshow; Grocery & Specialty Food West, Canada’s leading western grocery trade fair; and the Planted Expo, Canada’s largest plant-based consumer event of the year.  These shows affirmed our belief that we have a winning product line and we have seen an increase in sales activity from retailers, food service outlets as well as consumers buying directly through the PlanteinTM website (www.plantein.ca).

Ragogna concludes, “The Company continues to make plant-based food manufacturing our priority. We firmly believe that the plant-based category has a bright future and as a manufacturer, we are well positioned to penetrate this market. Senior management is reviewing all operations and continues to create and execute a detailed strategic plan that focusses our attention on our core plant-based manufacturing business while reducing or eliminating operations that are not contributing to the growth of the Company”.

During this reporting period, Covid-19 uncertainty negatively affected sales of existing product lines as well as impaired launches of new product lines. On March 11, 2020, the World Health Organization declared the outbreak of the novel coronavirus (“COVID-19”) a global pandemic resulting in governments worldwide, including the Canadian government, to enact extensive measures in an effort to limit the spread of the virus. These measures, which include social distancing, travel restrictions, outright travel bans, and closures of non-essential businesses including restaurants, created a challenging period for the Company.Naturally Splendid recorded a net loss and comprehensive loss of $3,269,452 for the year ended December 31, 2021, compared with a net loss of $4,659,642 during the year ended December 31, 2020. The decrease in net loss and comprehensive loss was attributed to the decrease in selling and distribution expenses.

Gross profit margins increased by 3.4 percent of sales in the year ended December 31, 2021, compared with the year ended December 31, 2020. This is due to the increased profit margins in the new plant-based sales. The company’s sales decreased by approximately $812,600 from the comparative period. During the year ended December 31, 2021, selling and distribution expenses decreased by approximately $560,000 largely due to a decrease in production (facility costs, quality assurance and lab testing) and production wages, which were offset by the government wage subsidy received during the year. Administrative expenses decreased by approximately $896,000 predominantly from corporate promotions and share-based payments. The decrease was attributed to a reduction in investor relations activity and the reduction of share-based payments.

During the year ended December 31, 2021, selling and distribution expenses decreased by approximately $560,000 largely due to a decrease in production (facility costs, quality assurance, lab testing and reduced production) and production wages which were offset by the government wage subsidy received during the quarter. Administrative expenses decreased by approximately $896,000 mainly from share-based payments and corporate promotions. The decrease was attributed to a reduction in investor relations activity due to the pandemic and the reduction of corporate salaries from the government wage subsidy.

The company continued its sales mix with exports of bulk seeds and launching its new plant-based products. The bulk hemp seeds sold at a lower gross margin percentage than compared with the plant-based products and private label sales. The company will continue to focus on its higher-margin products and new commercial opportunities. Gross profits for the year ended December 31, 2021, were $82,181 (11 percent of sales) compared with $142,930 (7 percent of sales) for the year ended December 31, 2020. 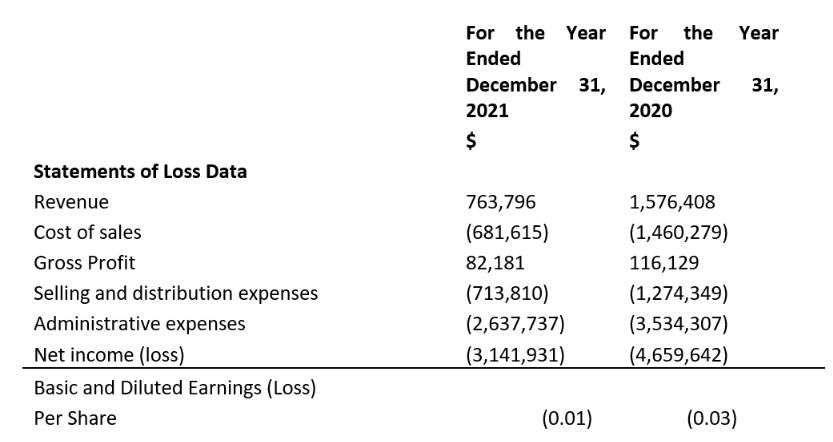 Founded in 2010, NSE operates a food manufacturing facility just outside Vancouver, BC in Canada. The Company has established numerous healthy, functional foods under recognized brands such as Natera Sport™, Natera Hemp Foods, CHII, Elevate Me™ and Woods Wild Bar™, and most recently Natera Plant Based Foods, a line of delicious plant-based meat alternatives for the rapidly growing plant-based market segment. The Company has a myriad of new products and line extensions under development that are approaching launch. NSE, through its joint venture Plasm Pharmaceutical, has been approved for conducting a phase 2 clinical trial approved by Health Canada for treatment of COVID-19. NSE has also developed proprietary technologies for the extraction of high-demand, healthy omega 3 and 6 oils from hemp.

On Behalf of the Board of Directors

Information set forth in this news release contains forward-looking statements that are based on assumptions as of the date of this news release. These statements reflect management’s current estimates, beliefs, intentions and expectations. They are not guarantees of future performance. Naturally Splendid cautions that all forward looking statements are inherently uncertain and that actual performance may be affected by a number of material factors, many of which are beyond Naturally Splendid’s control including, Naturally Splendid’s ability to compete with large food and beverage companies; sales of any potential products developed will be profitable; sales of shelled hemp seed will continue at existing rates or increase; the ability to complete the sales of all bulk hemp seed purchase orders; and the risk that any of the potential applications may not receive all required regulatory or legal approval. Accordingly, actual and future events, conditions and results may differ materially from the estimates, beliefs, intentions and expectations expressed or implied in the forward-looking information. Except as required under applicable securities legislation, Naturally Splendid undertakes no obligation to publicly update or revise forward-looking information.